Research validates a 90% reduction in disruptive behavior after just 3 weeks of using Vidgets!

"Kindergarten Teacher of the research study shares that one of her students has taken OFF in her ability to attend to written tasks.  After a week of using the Vidget the student was writing using 1-2 sentences and is now sitting down for extended periods of time to write 5-6 sentence paragraphs! The student often sits to write of her own accord now. I'm so grateful to have the Vidgets to give her the sensory input she needs so that the output matches her ability level.  Vidgets are an amazing seating option for early education students! I think every Kindergarten class should have them!

By Jackie Bartell, MS Ed, Internationally recognized autism & special education trainer and consultant
Incorporating active and flexible spaces allows for student movement in the routine and structure of a school day, is showing dramatic results in changing how students self regulate and learn. Educators in the 21st century classrooms with a student-directed learning focus who had alternative seating like the Vidget 3-in-1 Active & Flexible Seating System™ in their classrooms have reported a 90 percent decrease in disruptive behavior after three weeks of use.

One teacher stated that a student has “taken off in her ability to attend to written tasks. Before Vidgets, the student consistently wrote just a word or two during a writing task. After a week of using the Vidget, the student was writing, using  one to two sentences and is now sitting down for extended periods of time to write five-to-six-sentence paragraphs. The student often sits to write of her own accord. I’m so grateful to have the Vidgets to give her the sensory input she needs so that the output matches her ability level. Vidgets are an amazing seating option.”

The success of the Vidget® lies in its capacity to provide students with the sensory input they need to pay attention, focus, and engage in the learning process. This sensory input, largely focused on the proprioceptive and vestibular sensory systems, supports this attention through self regulation.

Active student-directed learning requires that the teacher becomes “the guide on the side,” as eloquently coined by [ (Speicher, 2009)]. And this learning occurs most easily when students are poised to pay attention and engage. But in examining how this happens, how can we ensure it happens for each student? It’s only when the guide on the side understands each student’s unique profile that they can assist in focusing the student’s attention to easily engage with instruction. Additionally, making the effort to understand each student allows for an environment that encourages and nurtures relationships and sensory organizing activities, necessary for successful learning, which in turn result in improved educational outcomes. In other words, teachers who use sensory input-based interventions can stimulate vestibular and proprioceptive sensory systems to assist children in improving on-task behaviors.

Adaptive responses happen when students actively and intrinsically engage in controlling how much and what type of sensory input their bodies need. The sensory system includes the five traditional senses plus two more: proprioception and vestibular (the organizing senses). Proprioceptive and vestibular senses provide information about where a body is in space and how it is able to move through space; however, when these two systems are not working well, it becomes difficult to attend and focus because these organizing functions are not in sync with the body. Since classrooms can be very busy environments and require multi-sensory processing, it can be difficult for some students to maintain an optimal level of attentiveness or arousal because they are sensitive and/or under-responsive to various sensory stimuli. Receiving input into their proprioceptive and vestibular systems therefore can become an organizing factor for improved attention and engagement. The proprioceptive and vestibular systems’ role in student-directed learning is paramount, because it supports student self-regulation.

Organizing Sensory Input To Self Regulate

A student in a 21st century classroom is expected to be able to self regulate or organize the sensory input they are experiencing in order to make an adaptive response. Self regulation is their ability to process the sensory information from all seven senses in order to manage their emotions and behavior in step with the demands of the learning environment. However, if a student is unable to regulate this sensory input, higher-order cognitive processes, including relationship building, attention, focus, and, ultimately, learning, suffer.

Each student comes to the 21st Century classroom with a unique profile in how they organize the sensory input of the environment. Their sensory modulation or regulation is on a continuum (see Figure 1) that includes people who under or over register sensory experiences. For example, we have all seen those students who passively experience instruction, those who actively experience instruction, and those who seem to be in just the right place. Each student has to work differently to achieve the self regulation that brings them to just the right place, the spot that optimizes learning and their educational outcome. Students may begin or fluctuate throughout the school day to the left or right of just the right place, but through ongoing self regulation, students can find their way back to just the right place. 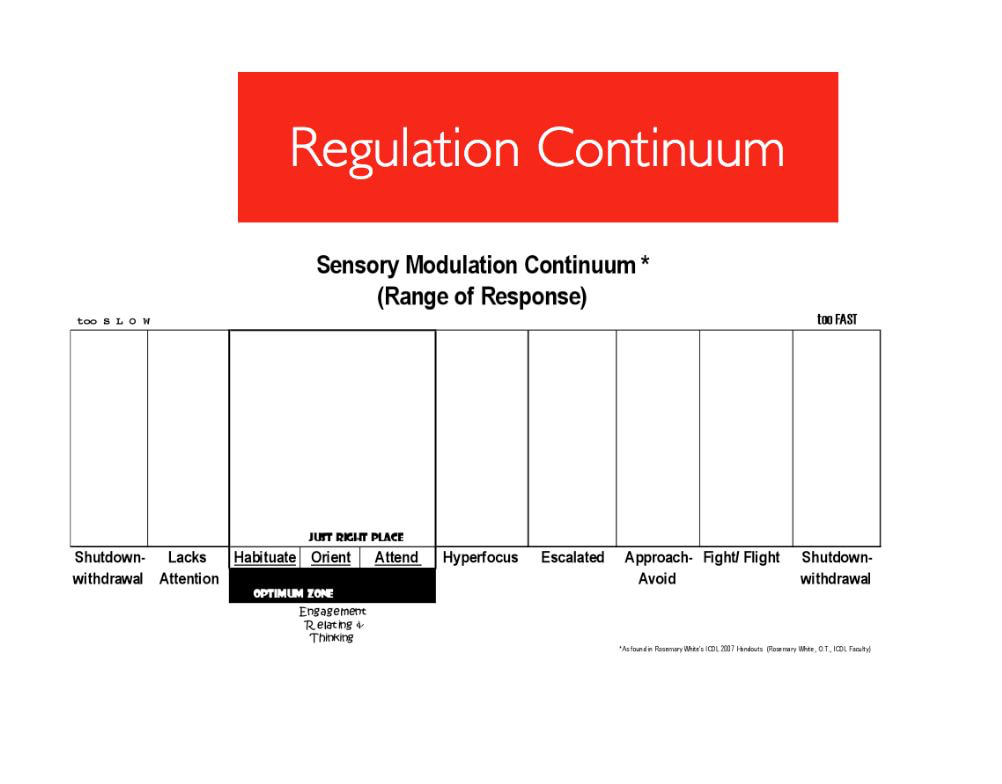 Movement can facilitate the organization of sensory input to achieve self regulation. Integrating movement into the 21st century classroom activates learning by stimulating each student’s brain to maintain attention and focus, thereby integrating learning across both hemispheres of the brain to enhance memory and reduce the prospect of feeling overwhelmed or overloaded. But the challenge is: How do we facilitate movement in a classroom to support self regulation without taking away from the teaching and student-directed learning?

Flexible and dynamic seating can provide options that promote movement, which in turn results in proprioceptive and vestibular stimulation. In 2011, Fedewa and Erwin found flexible seating using stability balls provided vestibular and proprioceptive stimulation that resulted in improved attention and in-seat behavior during class instruction and assignments. In 2008, Pfeiffer, Henry, Miller, and Witherell found similar results with Disc O Sit cushions, and in 2003, Schilling et al. made a comparable discovery with therapy balls. Fedewa and Erwin (2011) also reported an increase in on-task behaviors of general education students, with no prior attention issues, who also used flexible seating options.

these seating alternatives. Active movement boosts proprioceptive input to the sensory system that also organizes sensory input from the environment, resulting in self regulation. Passive movement is useful if a learner is in just the right place and does not need to be actively receiving proprioceptive input. Movement opportunities that work best for self regulation occur when a student can freely engage in the type of movement they need when they need it, taking into account the fluctuation of need that happens across an academic day. To that end, seating that allows for both active and passive movement is optimal.

Any tool intended to meet a variety of needs must have a flexible component built into its design. It must address the fluctuating regulation needs of students (both active and passive movement) and be available to them as they physically grow. In addition, the tool should strategically take into account all stakeholders in the educational arena, primarily students and teachers. Students need tools that optimize their capacity to focus, attend, and engage in student-directed learning. Teachers need to be free to nurture the relationships that foster student-directed learning and not be encumbered by having to manage students’ movement activities or behaviors that can occur when they are not able to self regulate.

A flexible seat is not only flexible in the sense that it can be moved around; it is a seat that has flexibility in its design and use. It enhances movement that brings about proprioceptive input, which organizes the other sensations that students receive to make sense of the world. A flexible seating system then should be one that elicits active proprioceptive movement/input or passive movement based on student need, not teacher direction. And example of this is the vidget.

The Vidget® naturally provides movement and proprioceptive input to assist with a just right regulatory response. The Vidget 3-in-1 Active & Flexible Seating System™ uses a three-in-one design that allows for both active and passive movement. It includes an active seat, a supported stool position, and a table top desk surface by simply turning it over. In the active seat position, a student can actively move in a safe manner by rocking side to side, without the possibility of tipping the chair backward, mimicking a therapy ball without the need for adult supervision (see figure 2).

Figure 2: Vidget 3-in-1 Active & Flexible Seating System: Active Seat, Stool, Desk Combo
​The system allows students to select what position they want to sit in throughout the school day, so they can easily change position, as needed, without direction from teachers. (see figure 3) Students become autonomous in managing their regulation, and teachers are freed up to engage in instruction and not management, moving away from a prescriptive rules form of instruction to permissive guidance. 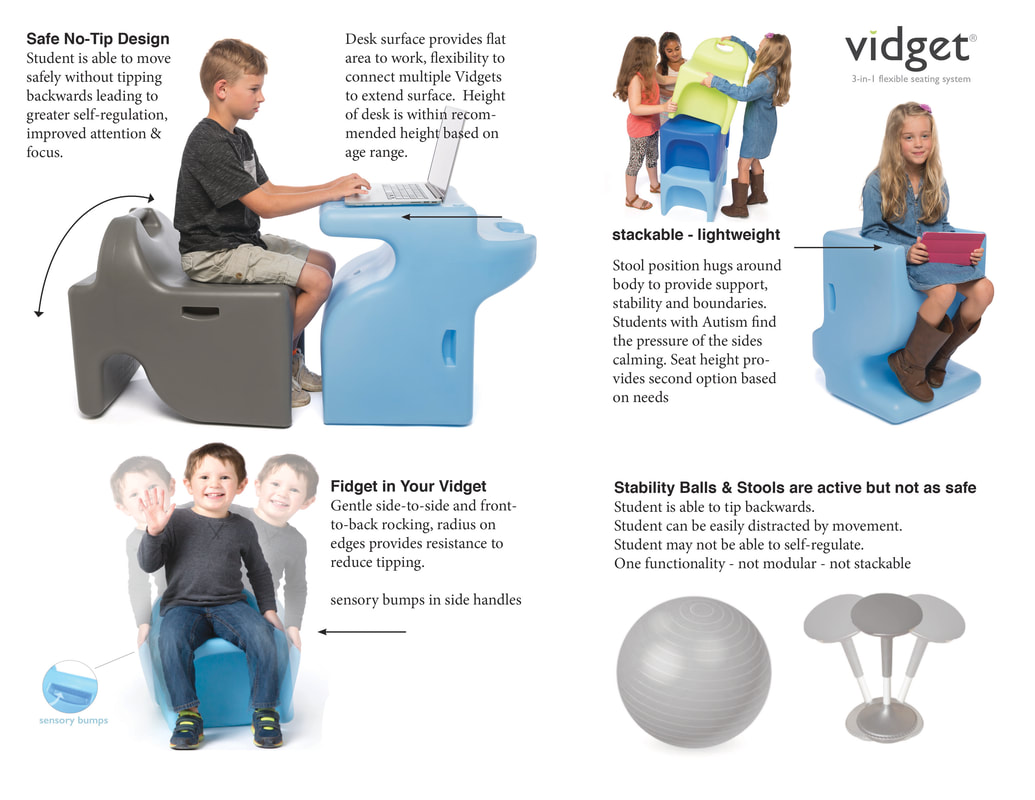 Figure 3
​The Vidget® influences the balance that is needed for classrooms and students to achieve amazing learning results where students are inspired to learn, rather than required to learn. In the future, with more ubiquitous use of furniture like “Vidgets that help students achieve self regulation, their potential for greater educational achievement will increase.